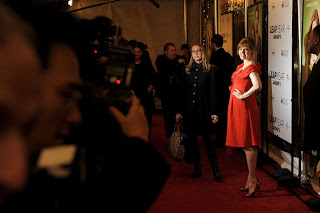 Amy Adams at the premiere of Leap Year in NYC.

Ever since seeing the movie Enchanted, I have decided that life doesn’t get more adorable than Amy Adams. I was right. Check out the now-pregnant star at the premiere of Leap Year this week in New York. So cute! And I love the red. Apparently, Adams commissioned Carolina Herrera to create the dress — and her entire press tour wardrobe — to accommodate her ever-expanding belly. On Good Morning America, The Late Show With David Letterman — all week, she has been impeccably dressed. Not that I would expect anything less from someone as adorable as she.